This was a revered era in motor sport. Initially intended as a series for modified road cars and gentlemen drivers, the FIA GT1 Championship tempted major manufacturers such as McLaren, Mercedes and Porsche to create purpose-built racers in the factory. Manufacturers could enter any 'road car' as long as at least 25 examples had been built for homologation purposes. The CLK GTR therefore was conceived as a racer, then adapted for the road.

The car dominated the 1997 FIA GT1 Championship, winning six of the 11 rounds on the way to claiming the drivers’ and teams’ titles. It also won the opening two rounds of the ‘98 season, before Mercedes moved onto the CLK LM.

Cementing an unparalleled array of 150 cars in what RM Sotheby's is calling its most historic-ever line-up, the CLK GTR offered for auction is the ninth of just 25 examples built. Having covered less than 1500km under three owners, it's been fastidiously maintained and is offered in as-new condition. The last of the true hypercar racers, it has a top speed of 214mph and is capable of 0-100mph in just over six seconds. It is expected to bring in between $4,250,000 and $5,250,000.

Shelby Myers, RM Sotheby's car specialist, believes it will be a sound investment: 'Unequivocally, the CLK GTR represents the most undervalued and silently underappreciated supercar of the modern era. Considering that it's one of the rarest high-performance production cars of its contemporaries, at nearly one-fourth of the price of a McLaren F1 – of which there are more than 60 – it's only a matter of time before the model escalates to near-equal market value as the $20m supercars.'

RM Sotheby's has also added to the Monterey sale a never-raced 2017 Mercedes-AMG GT3 Laureus. Proceeds will go to the Laureus Sport for Good Foundation, which aims to use the power of sports to support disadvantaged children worldwide, and is active in over 40 countries with support from numerous athletes on 100-plus projects. The car is estimated to fetch between $400,000 and $600,000, and is offered without reserve.

The auction is set to take place on August 24-25 at the newly renovated Monterey Conference Centre in California. It'll be held during the Pebble Beach Concours d'Elegance motoring week. 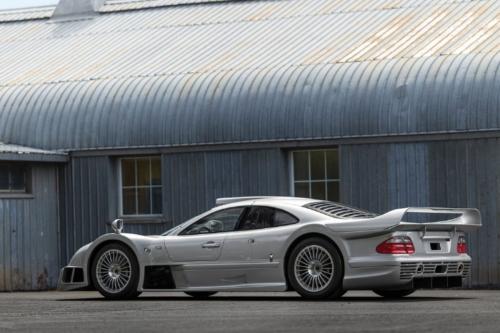