This Mercedes CLA Has More Power Than a Mustang Mach 1, Is Quicker Than a Gallardo

mercedesMercedes CLA
Since the automotive industry has pretty much taken a break until next week, we have started coming across some interesting rides from various tuning companies.

One of them is the pictured Mercedes CLA, which is not your run-of-the-mill premium subcompact ride for quite a few reasons.

First of all, it is in the Shooting Brake specification, or sporty wagon if you will, and second, it has more power than stock, courtesy of Vath, and it was anything but a slouch when it rolled off the line at the Kecskemet factory in Hungary.

At first glance, it doesn’t look that special compared to an unmolested example, but it does stand out courtesy of the aggressive styling given to it by the Affalterbach brand. Here, we can mention the dedicated front and rear bumpers, Panamericana grille with vertical slats, large spoiler attached to the tailgate, and no less than four tailpipes, one for each cylinder of the engine. The look is completed by the usual amount of AMG badges, and by the wheels.

But more on the latter in just a few moments, as first we have to get back to the power part, as it has new software and downpipes, as well as a new exhaust system with adjustable flaps. The result is a very impressive 490 ps (483 hp / 360 kW) and 620 Nm (457 lb-ft), which enables the 0 to 100 kph (0-62 mph) in just 3.7 seconds. This makes it a few tenths of a second quicker than the Lamborghini Gallardo, and a bit more powerful than the Ford Mustang Mach 1.

By comparison, the stock Mercedes-AMG CLA 45 S Shooting Brake has 421 ps (415 hp / 310 kW) and 500 Nm (369 lb-ft) of torque. The turbocharged 2.0-liter four-cylinder engine works in conjunction with an eight-speed dual-clutch automatic transmission and front-biased all-wheel drive. According to the official spec sheet, you are looking at four seconds required for the sprint, and a top speed of up to 270 kph (168 mph).

Upgraded brakes can be found on Vath’s shelves for this model, with 390 mm (15 in) discs and six-piston calipers, and a 20-mm (0/8-in) lowered ground clearance courtesy of the coil springs. As for the wheels that we mentioned above, they measure 20 inches in diameter, were shod in 265/30 winter tires at both axles, because it is the cold season in the northern hemisphere, and were signed by Vath.

Were you perhaps hoping to hear about some wacky visual tweaks, like bigger bumpers at both ends, fatter side skirts, beefed-up wheel arches, and a ginormous wing at the rear? Well, don’t, because this is where the tuner drew the line, and we’re glad that they did it, because it makes this CLA 45 S Shooting Brake even more appealing. 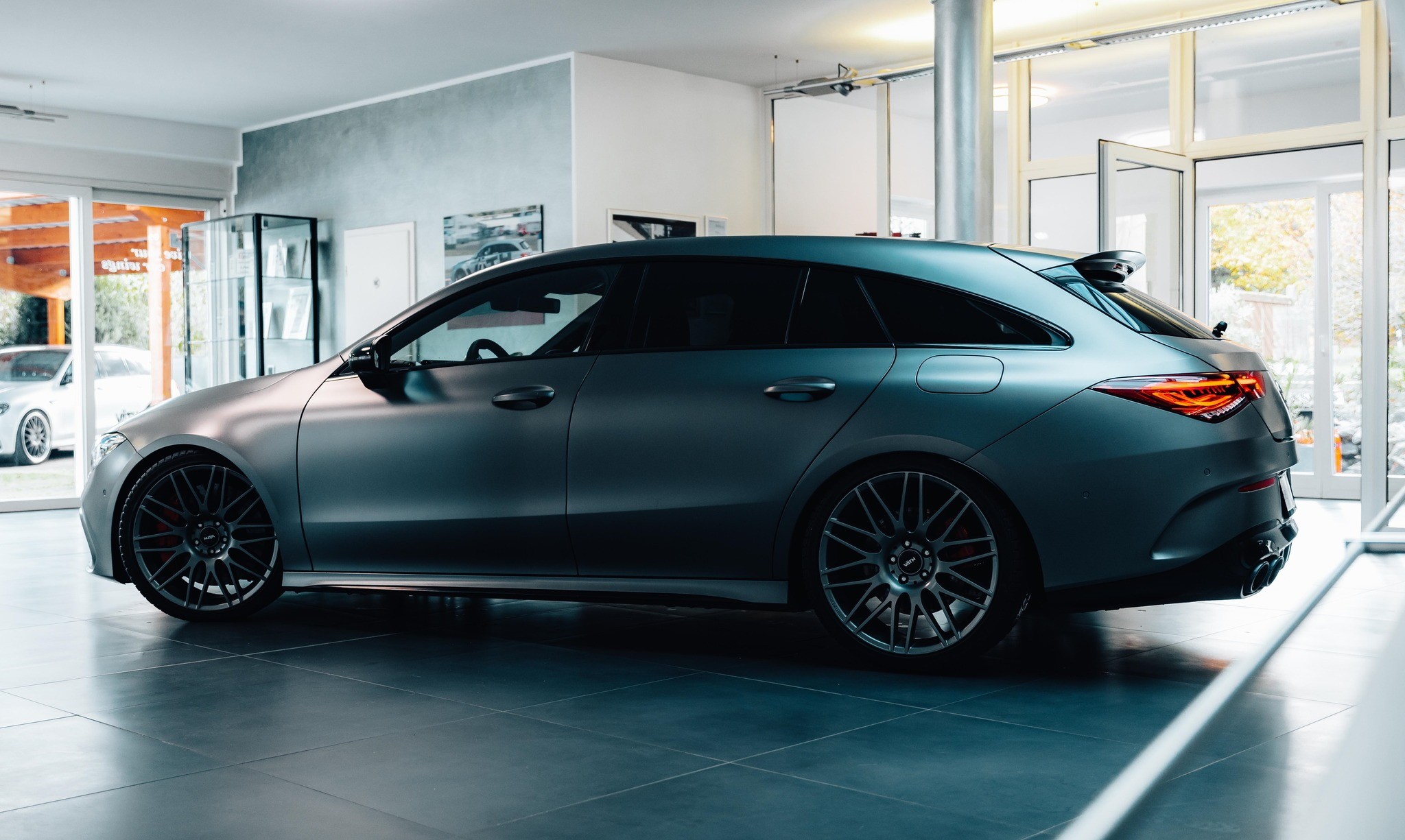