Imagine an electric car that would allow you to get from the centre of London to the car park at the UK’s northernmost point at Dunnet Head, near John o’ Groats, on a single battery charge – almost 700 miles – with absolutely no compromise in speed, comfort or, most important of all, driving enjoyment.

Not possible? One manufacturer is convinced it is and that's why the Mercedes Vision EQXX concept is here to prove it.

The rear-wheel-drive saloon acts as a showcase for the sort of electric driveline technology, aerodynamic developments and lightweight construction Mercedes says it is pursuing for future production models. Unlike most concepts, it is fully road legal. Officially, the new four-door is claimed to achieve 7.5 miles per kWh – twice as efficient as the recently introduced Mercedes EQE 350. With a specially constructed 100kWh battery integrated into its flat floor, this gives it a theoretical range of over 700 miles.

By comparison, the rear-drive EQE 350 with a 90.6kWh battery has a claimed range of 410 miles. The 900V unit features the latest lithium ion cells from CATL. They use a silicon anode and are claimed to provide an energy density of up to 400Wh per litre, making them far more energy efficient than the cells used in the batteries fitted to existing EQ electric models.It is also claimed to be 50% smaller and 30% lighter than today’s batteries.

Mercedes has already shown the potential of the Vision EQXX in two development drives, the latest of which was from Stuttgart to Goodwood, a distance of 747 miles, without the need for recharging. However, this was achieved by a team of highly trained test drivers with real-time access to all the information thrown up by a boot full of data loggers and in constant radio contact with engineers back at Mercedes’ base in Germany.

Nevertheless, so confident is Mercedes in the Vision EQXX’s ability to hit lofty efficiency targets with any driver at the wheel that it has just thrown me the key and told me to go for a drive to find out for myself just what is possible. Not just a low-speed tootle up the road and back, either, but a proper run along a series of undulating roads in and around its sprawling Immendingen R&D facility.

It is the second time we’ve stepped aboard the low-slug four-seater, the first having come as a passenger ride in April.But before I slide into the driver’s seat and hit the start button, a quick recap of what’s underneath its distinctive teardrop-shaped body, which with various active spoilers, including a complex multi-piece diffuser that motors out from the lower edge of the rear bumper at speed, achieves a record-breaking drag coefficient of 0.17.

The starting point for the Vision EQXX was a Mercedes EQB prototype mule known as Emma (see separate story, right). Constructed last year, it was used to test the packaging and durability of the concept’s high-tech driveline and the various software that allows it to achieve such outstanding economy figures.

The car itself is largely bespoke, including the platform, which has a distant relationship to the MMA (Mercedes Modular Architecture) used for cars such as the EQC saloon that will reach the UK around 2025. At 4977mm long, 1870mm wide and just 1350mm tall, the Vision EQXX is 226mm longer, 50mm wider and 105mm lower than today’s C-Class. Its wheelbase is 40mm shorter, at 2800mm.

With a high-strength steel body structure, carbonfibre doors and aluminium brake discs among other weight-saving measures, it also weighs only 1755kg, which has allowed Mercedes to fit just one motor.

The compact 241bhp synchronous unit, integrated into the rear axle, was developed jointly by Mercedes’ German engineering team and its HPP (High Performance Powertrain) division in Brixworth. Drive to the rear wheels is via a single-speed gearbox. The driver’s door opens wide, providing easy entry despite the relatively low height. The hardshell front seats, with rather firm cushioning yet little lateral support, are mounted fairly low, but without dedicated footwells, the pedals are set quite high, creating a very sporting driving position.

The view to the rear is non-existent, because an array of solar cells covers the entire roof and the space that would usually be dedicated to the rear screen. The dashboard, largely devoid of switchgear, sits quite low and houses a full-width, 1100mm-wide 8K curved digital display panel. The touchscreen unit is home to a whole load of menus and data, including wind direction, which is measured by three tiny sensors within the front end.

It’s all very stylish, but it’s not simply for show. Everything functions just as you’d expect it to on a regular Mercedes production car.

To move off, you draw the Direct Shift column stalk down into P and nudge the throttle, just like in any EQ production model. There are smooth and highly refined qualities to the electric motor once under way. For a one-off, it exudes outstanding drivetrain engineering integrity. Performance is quite strong from the off and it feels rather brisk under load up to the governed 87mph top speed.

But with Mercedes’ engineers remotely tracking my every move, now is not the time to explore just how fast it can accelerate. Instead, we settle into a loping cruise to see just how close we can get to matching the economy figure achieved by Mercedes’ test drivers.

A digital readout display provides real-time consumption, which we try to keep as low as possible within a reasonable speed. The original plan was to run without air-con to gain an added advantage on the economy front, but with the temperature nudging 30deg C in the midday sun, we decide this isn’t such a good idea.

At typical motorway speeds, the Vision EQXX is superbly refined. Besides the hushed qualities of the electric motor, there is an almost complete lack of wind buffeting. It’s here where the rear diffuser deploys to lengthen the bodywork, reduce underbody turbulence and provide added longitudinal stability.

There are four modes of regenerative braking, activated via steering-wheel-mounted paddles. At one end of the scale, you rarely need to physically operate the brakes, even in slower corners. At the other end, the Vision EQXX rolls freely without any discernible mechanical drag for impressive distances without using any electricity at all thanks in part to its 185/65 R20 low-rolling-resistance tyres, developed specifically for the concept by Bridgestone.

The constant juggling between the different modes makes the consumption rise and fall. It’s both challenging and entertaining. From a driver’s point of view, there’s a lot to like about the dynamics.

It starts with the rearwheel drive layout. The steering is also quite weighty and surprisingly precise, while the packaging of the battery within the floor provides a low centre of gravity and with it engagingly agile, almost sporting traits to the handling. The suspension is heavily damped to ensure a constant ride height and the best possible aerodynamics.

On the typically smooth German roads we’re on, the ride is perfectly acceptable – firm but never harsh. With excellent forward vision and relatively narrow width, the Vision EQXX is easy to place on the road. For an electric car, it feels uncommonly lithe, responding immediately to every input. As we settle in for the remainder of the roughly 10-mile test drive, we notice that the concept already has more than 10,000 miles on the odometer – proof that there is real substance to its engineering. It feels right at home making progress on a variety of different roads, at both low and high speeds.

Right now, it is hard to say just how much of the Vision EQXX’s range-busting technology is set to feature in upcoming electric Mercedes models. But as a show of intent, it is very impressive. The longer you drive it, the more convincing it becomes. It already feels mature enough to go into production right now. Such thoughts, however, ignore the costs that have gone into its creation.

When we reach the end of our test drive, we receive a readout from the data logger that shows the throttle applications, braking, steering angles, operating temperature and much more. It is the economy figure we’re after, though. To our surprise, it actually betters Mercedes’ claim, at 8.0 miles per kWh, despite the operation of the air-con and the inclusion of a passenger throughout.

London to John o’ Groats on a single battery charge? No problem at all. In fact, by our reckoning, you’d achieve it with range to spare. 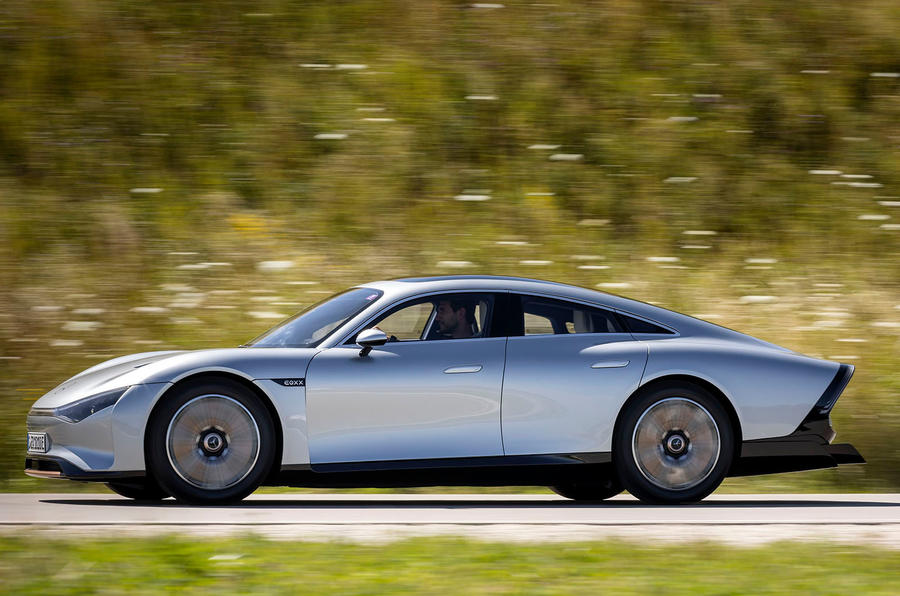 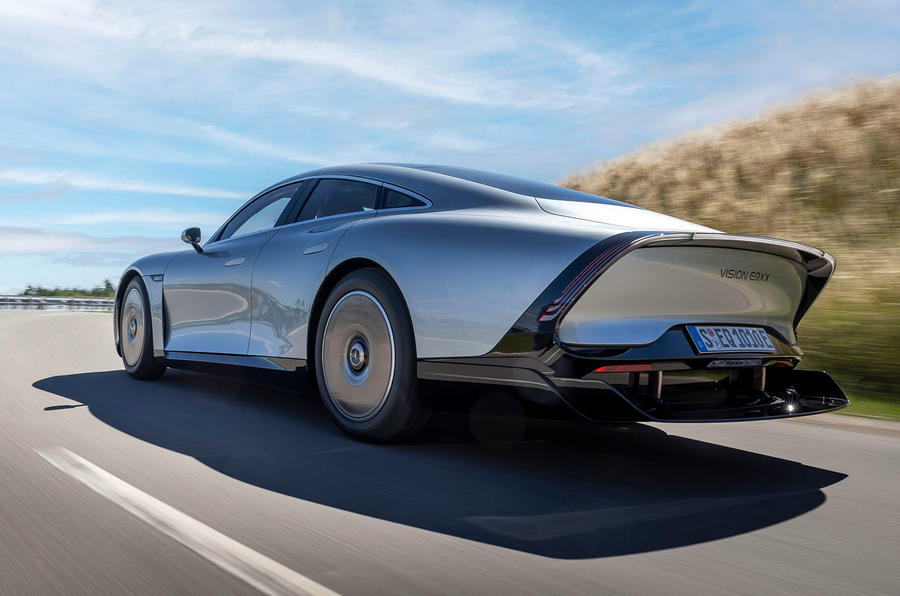